"We must pray and do penance and hope in God and His Holy Mother; for the saints say: From the day on which Christ died souls must be bought by blood. If only, by sacrificing my own life, I could bring all people to know and love God as He deserves. But let God's holy will be done in all things."
- Blessed Peter Donders (1809 - 1887) 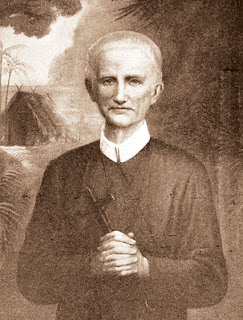 Today is the feast day of Blessed Peter Donders. Peter was born in Tilburg, Holland, in 1809. Peter had wished to become a priest from a young age, and at the age of 22 he entered the Minor Seminary. On June 5, 1841, he was ordained a priest. In 1842, Peter was sent to the Dutch colony of Surinam, and later was sent to Batavia. In 1866, when the Redemptorists were going to take charge of the mission of Surinam, Peter and one other priest requested to join the Congregation. They were accepted and took their vows in 1867, and immediately after this Peter returned to Batavia. In 1883, he was transfered to Paramaribo and then to Coronie, but later returned to Batavia in 1885. In December of 1886, Peter was confined to his bed, and on January 14, 1887, he died. He was beatified by Pope John Paul II on May 23, 1982.

http://papastronsay.blogspot.com/2013/01/unexpected-photo-from-pakistan.html
Posted by Unknown at 12:00 AM